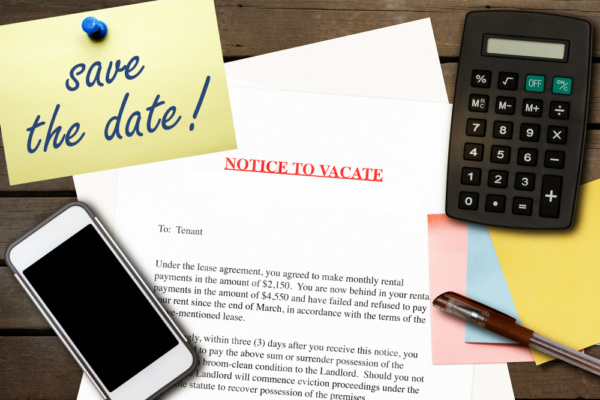 The Post-Dated Notice To Vacate

According to urban legend, there are teachers who will address their students on the first day by stating “As of today, you all have F’s.  It is your job to work your way out of the cellar to the grade you truly deserve.”  Urban legend or not, I had such a teacher – AP English…senior year of high school.  For fear of a 25-year grade reversal, I won’t mention said teacher’s name. Let’s just call him/her, The Professor.

The Professor was a piece of work; hard, brash, and unyielding in every sense of the word.  The Professor treated everyone as if we were already in college. Students with excuses were often ridiculed and those who outright lied were made to exit the class altogether.  The Professor had extremely high standards and very little patience. Everyone dreaded their daily encounter with The Professor and thought of graduation more like prison release day.

So, imagine the collective groaning when The Professor was tapped to represent the faculty and give a speech during the graduation ceremony.  The Professor, really?  In the past, the faculty representative was always the “popular” teacher, the one who got the most screams and cheers from the graduating class.  The year before, when my sister graduated, the faculty speaker quoted Run DMC. That’s what we wanted – not some long, drawn out soliloquy by The Professor.

The Professor began with, “I want to open by stating three important facts.  Yes, I was tough. Yes, I demanded a full effort from each and every one of you.  And yes, you have become better human beings for it.”  The Professor went on to explain the “work your way out of the cellar” philosophy tested a student’s motivation, tenacity and confidence.  For a student’s grade go from an F to a B over the course of the year, purely based on effort, was more of a motivation than to tread water or to just get by with the minimum required to pass the course.

Years later, I still remember his closing, “Whether you’re swimming or treading water, your arms and legs are moving.  The big difference is swimming gets you to the shore. Treading water gets you exhaustion.”

So how exactly does The Professor relate to our industry?  Well, imagine a new resident arriving for move-in, happily looking forward to becoming a part of your community.  Upon signing the final page of the lease, they turn in a post-dated notice to vacate. What they’re saying is, “I have every intention of leaving after one year unless you can convince me otherwise.”

If you knew a resident was on their way out at day one, would you throw in the towel or prove them wrong?  It’s the same as the out of the cellar philosophy. Motivation, tenacity and confidence mean everything to resident retention.  Make the most of every resident interaction, have ready answers (not excuses) and demonstrate there is no better community for your resident through unparalleled service.

: evict, notice, vacate
Previous Post Does Your Prospects’ Perception of the Community Meet Reality? Next Post What Impacts The Renewal Decision?